I'm not too pleased with the chimney guy putting white caulking on my brick.....really?  The crown was what he was supposed to take care of.....it looks really hokey now.  Plus, he was a talker and a bragger and then he forgot his tools and called me later to get them out of the yard for him so they wouldn't get rusty.....I about burned my hand because they had been laying in the sun.  I have no patience with people I am paying who want me to listen to what a good job they do and how much more talented they are than other workers.  Geez Louise!  I want to tell them if you want me to listen to you than I'll need a refund!  I had a painter one time and I would come home from work and he wanted to tell me all about his day and what he had done.....I finally  told him I had worked all day and I was tired and he should go home....he got mad!  I've forgotten how some men need their ego boosted all the time...well, they better look elsewhere!

But the chimney's done and he's not coming back.....oh, yes he is...to pick up his tools.  Now you know why I live alone! LOL!     Don't get me wrong....I love my pest control guy and my lawn guy,  they are both professional and respectful of my time.

I did get the quilt layers laid out but just barely........I need to smooth it all out.  I vacuumed the rug really well before I laid it out.  Hopefully, tomorrow I'll get back to it. 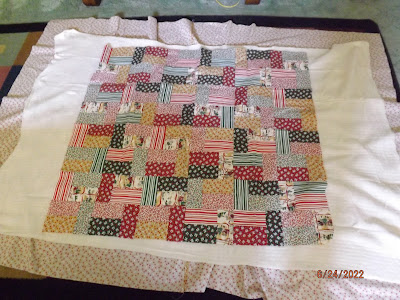 I'm not in a very good mood considering what our political supreme court did today.  They are an abomination.....overturning Roe vs. Wade and yesterday allowing people to be armed whenever and wherever.....what the heck....we're going backwards in this country!  Justice Thomas has indicated that contraception and gay marriage will be next.  He should be impeached since his wife was involved in the insurrection.  If it was you or I we would already be in jail.   It's an autocracy heading towards fascism...it matters not what the people want but what the rich want.  The majority of Americans are for abortion rights, sensible gun control, a living wage, Universal Health Care and more but it doesn't matter what the people want.  The next thing you know they will be taking away the right to vote which in reality they are already doing by making it harder for some to vote.  It's an extremely sad day for our country.

Posted by www.self-sufficientsam.blogspot.com at 5:29 AM

I was in high school before Roe. The rich girls would "visit an Aunt in New York" or go on a "family vacation" to Mexico or the Caribbean. The other girls would stuff themselves into girdles to hide their tummies because they would be expelled if anyone found out. My friend's cousin got "outed" and had to quit school as a sophomore. Her boyfriend continued in school and was quarterback.

Now guns have more rights than my granddaughters. I am sick to my stomach.

Far Side of Fifty said...

Wow that guy was an idiot, but maybe it will weather some with time.
Sad days and probably more coming with the Supreme Court.

Yes, a sad day for women and a scary future for all of us. Are we going to see people (men) standing in line at the supermarket with a gun? I don't know what to expect anymore. It seems as if common sense has gone out the window.

www.self-sufficientsam.blogspot.com
Sam I Am...... Hi there! Welcome to my blog. I am a retired systems programmer and yet I still love to work but now I get to chose the projects! I hope you find motivation and inspiration here as I do from the blogs of others. Thanks for stopping by! If you need to contact me my email address is saminil104@gmail.com