I found a recipe for using crescent rolls to make cinnamon twists.  I have 2 tubes of crescent rolls.  I must have bought them for Thanksgiving but I never baked them.  I used a recipe from Taste of Home and they were delicious.  They were a bit messy and mine didn't turn out like the picture they showed but they were definitely good and better than the Pillsbury Cinnamon Rolls in the tube!  This is their photo.  I took a photo of mine but it didn't show up when I downloaded my pictures.

I received my first Christmas book to read for the season. It is called The Christmas Wish by Richard Siddoway.  I'll let you know what I think after I read it.  It's not very big so it shouldn't take me too long. 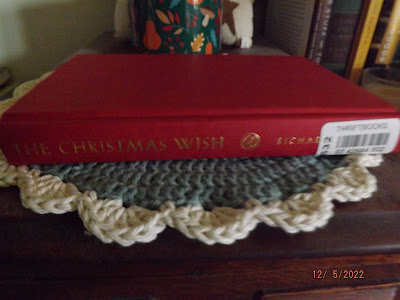 I received another Christmas card today.  This one was from my neighbor. 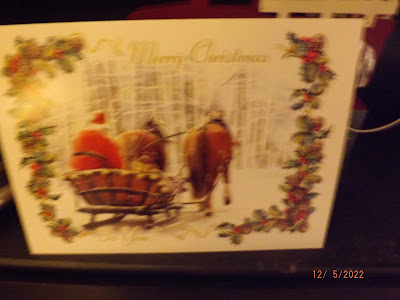 I sent Nancy a Happy Birthday wish and made a small start on the Sewing Box project.  Nancy had gotten back to me and we are starting on the long piece which will be made into a drum eventually.

I ordered the last Christmas present today and now the rest just need to be made, wrapped,  and mailed.

How are you coming with your holiday preparations?

Posted by www.self-sufficientsam.blogspot.com at 12:59 PM

I've had really good luck with recipes from Taste of Home. I'll have to try the cinnamon twists. I only have a few more gifts to purchase and then all the wrapping and cleaning. Also need to finalize the menu and do food shopping...geesh!

Still working on decorating the inside of our home and making Christmas yummiest. We had the dense fog yesterday. It is very unusual for us to have fog so It was kind of fun.

I love Taste of Home recipes. I was out of town and now I am in the "Christmas Crunch" time. I had big plans for today, but a repairperson running hours late foiled that. Hopefully I can get on track tomorrow.

Far Side of Fifty said...

Ornaments and cards done, I need to buy stocking stuffers:)

Jeanna -so good to hear from you. Somehow Blogger won't let me reply to individuals so I am replying here. Since I am not having company I am slacking a bit on the decorating but I have some baking and wrapping to do and sewing!

Leftycrafter - the fog stayed all day yesterday but there is nothing worse than trying to drive in it! That and a blizzard! I imagine that would be similar to your sand storms?

Miss Merry - yes...I had several people (termite, pest control, etc.) right before Thanksgiving and yes..it takes a big chunk out of your day! I hope you can catch up.

Far Side of Fifty - You're good. I don't do stocking stuffers anymore although Miss Peeps may get a few!

www.self-sufficientsam.blogspot.com
Sam I Am...... Hi there! Welcome to my blog. I am a retired systems programmer and yet I still love to work but now I get to chose the projects! I hope you find motivation and inspiration here as I do from the blogs of others. Thanks for stopping by! If you need to contact me my email address is saminil104@gmail.com